In July, due to the anticipated fiscal challenges caused by the COVID-19 pandemic, the Board of Public Works approved budget reductions associated with closing one MSPAC base. Last month, the governor stated that the cuts should not go forward, and has directed MSP to work with state budget officials to ensure the necessary funding is available to ensure all bases are fully operational.

“For more than half a century, the Maryland State Police Aviation Command has been conducting lifesaving medevac flights,” said Governor Hogan. “Our administration is committed to making sure Maryland’s Finest have all the resources they need to continue their excellent service to the state and the region.”

“Based on the governor’s commitment to do all we can to provide the best in public safety services, the Maryland State Police will keep all bases open and all helicopters in the current fleet,” said Colonel Jones. “We look forward to continuing our work in partnership with Maryland’s first responders and hospital providers.”

MSPAC has been conducting medevacs for more than 50 years and has flown more than 150,000 patients to lifesaving trauma care. It is a proud partner in Maryland’s world-renowned integrated emergency medical services system. 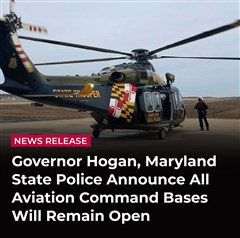 Maryland Fire Chiefs Association Is Proud To Partner With: